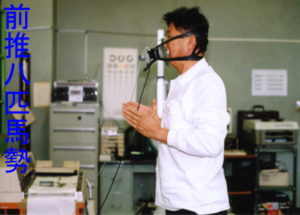 (2) maintaining contraction of both the upper extremity muscles and the antigravity muscles ;

(3) regulating consciousness in the uprighting posture. An instructor should pay more attention to a beginner with the disorder of labyrinthine sense organ system and to an on old person to prevent falls that usually occur during training.